On Tuesday, Elizabeth Smart was the guest speaker (video) at the Women Helping Women Luncheon at the Columbus Convention and Trade Center. The event was hosted by the Auxiliary of the Pastoral Institute.

For those of you who don’t remember, in 2002 at the age of 14, Elizabeth was abducted from her bedroom and held hostage for nine months. During her time on stage, I could not help but think of my own daughters. What a horrible ordeal for a person, let alone a child, to have to endure. Every ugly word one could imagine was going through my mind (I’m just being real here, folks).

Some of the things Elizabeth said (video) that really stuck with me were:

Elizabeth is now married and a senior at Brigham Young University where she is a harp performance major. At the conclusion of her speech, Elizabeth actually played (video)the harp.


Finally, I would be remissed if I didn’t mention what a moving speech Folayan Williams, a therapist at the Pastoral Institute, gave at the beginning of the luncheon when she talked about the Hope Fund.

All in all, I believe the event did raise child abduction awareness for the nearly 1,000 who attended the luncheon. 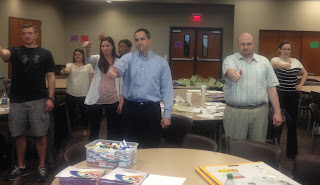 The winner of the free coaching session was Ms. Shanda Andrews. Shanda works in the Audit Department at Aflac, which is based here in Columbus, Georgia.

The winner of the free lunch-n-learn, where I will disucss the Five Elements of a Successful Leadership Team is Ms. Rosalind Alston, Program Coordinator, for Twin Cedars Youth & Family Services, Inc. in Columbus, Georgia.

If you're liking the new blog format, please, by all means, share with your peers.

Have a great weekend!