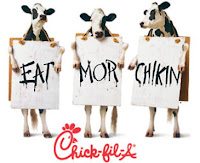 Joel Walker and Tracey Fowler of Chick-Fil-A will present, The Chick-Fil-A Way, at the 2011 Servant Leadership Conference. Come and learn everything you ever wanted to know about why this amazing company that is closed on Sunday is by far one of the best fast food chains in America today.

According to the company's website, Chick-fil-A has steadily grown to become the second largest quick-service chicken restaurant chain in the United States, with over 1,500 locations in 39 states and Washington, D.C. In 2010, annual sales were over $3.5 billion. Chick-fil-A is still privately held and family owned.

The 2011 Servant Leadership Conference will be held on October 20, 2011 at the Columbus Convention and Trade Center in Columbus, Georgia. The Chick-Fil-A is just one of five workshops to be presented during the morning session at this year's conference.