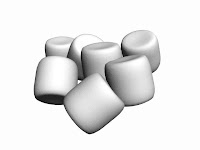 “The Marshmallow Experiment demonstrates the importance of teaching our children impulse control.” (soarstudyskills.com)

“In the 1960s, psychologist Walter Mischel conducted the famous Marshmallow Temptation Study among four-year-olds. In this experiment, Mischel presented each child with a marshmallow.

He then told the child that he or she could either eat the marshmallow immediately, or wait and get an additional marshmallow as a reward.
As anticipated, some children yielded to the temptation and some others withstood it. Walter Mischel followed the progress of these children, monitored their school records, and surveyed and interviewed their teachers and parents until the students reached age 18.” (Bankokpost.com)

“While a few children would eat the marshmallow immediately, of the over 600 who took part in the experiment, one third could defer gratification long enough to get the second marshmallow.[5] The experiment confirmed the hypothesis that age does determine the development of deferred gratification.”(Wikipedia.com)

“In a follow-up study (Shoda, Mischel, & Peake, 1990), children were tested at 18 years of age and comparisons were made between the third of the children who grabbed the marshmallow (the "impulsive") and the third who delayed gratification in order to receive the enhanced reward ("impulse controlled").” (econlog.econlib.org)

“The child who could wait fifteen minutes had an S.A.T. score that was, on average, two hundred and ten points higher than that of the kid who could wait only thirty seconds.” (newyorker.com/reporting/2009/05/18/090518fa)
Posted by Kelvin Redd at 3:26 PM