He Who Gossips to You Will Also Gossip About You 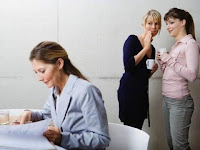 When there are numerous people working in the same department or division and they come into contact with one another on a regular basis, there is bound to be gossip and of the negative kind. In his article on Office Politicking, Terry Arndt writes, “Gossip is all but unavoidable in the workplace. The office "grapevine" is a staple of modern office life…repeating that you heard Shelia's getting divorced because her husband cheated on her with his secretary isn't harmless – it's hurtful. Arndt goes on to say, “At its worst, gossip can hurt feelings, lower morale, and even damage or destroy careers.”

I remember once asking the Administrative Assistant to my new boss if it was possible for me to have Thanksgiving weekend off. When talking to her on the phone, she seemed pleasant and said she would check into it and call me back. The next thing I know is that word was spreading around the division that I didn’t want to work. The truth is I was married on November 30, 1991 and when I asked off it just so happened that November 30 that year was on Thanksgiving weekend. It was my wedding anniversary.

If your organization prides itself on the philosophy of servant leadership, office gossip is the one thing that can eat at its very foundation. In the article, How to Completely Eliminate Office Gossip, R. Summerhurst says, “…know that malicious or excessive gossip disrupts production, lowers morale, and often targets individual employees.”

Personally, I don’t think there is anything worse than an Office Gossip, and you know who they are. They are the people you see whispering when talking to others. They bat their eyes, speak with their mouths close tightly and they freeze when someone walks into the room because they know they have been caught; and they are always listening and looking to see what is going on in the organization, so they can go tell it. They have the “I heard it first” syndrome.

I wrote today's blog because office gossip has been on my mind for quite a while. I have alwayws been leery of it. My father used to always tell me, “Kelvin, those who gossip to you will also gossip about you.”
Posted by Kelvin Redd at 7:13 PM