A Good Man Does Not a Good Leader Make 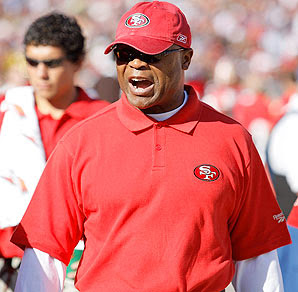 Yesterday Mike Singletary was fired as the head football coach of the San Francisco 49ers. But I am not surprised.

I have been watching the Singletary coaching saga since his head coaching career began. I have always been a fan of his and believe him to be a kind and caring human being. However, from all accounts, he had a serious problem projecting his sincerity to the very people he was entrusted to lead.

Singletary is obviously old school—meaning a student of the traditional top down model of leadership—a model that no longer works in the 21st Century. We are now living in the Age of the Millennials (born 1982-1998) and this new generation coming into today’s workforce doesn’t “cotton (can’t stand)” too well to tirades and put downs for motivation.Singletary seems to be a good man. According to Wikipedia (I know I am not supposed to cite Wiki), Singletary “has authored three books…owns a car dealership…and he and his wife, Kim, have seven children. He said all the right things and tried to do all the right things but it was the way he said them and the way he did them that cost him his job.

In a different era, Mike Singletary quite possibly could have been considered a great leader but eras change and so do the people who live in them. The great leaders are in touch with their times. It is unfortunate that Singletary was not.
Posted by Kelvin Redd at 2:40 PM